"Aim for the center of the green and hope that your club selection and wind speed calculations hold up to scrutiny!"

The Royal Dublin Golf Club was formed in 1885, then the Dublin Golf Club, following a meeting reported held at No. 19 Grafton Street, in Dublin city center, led by Scottish banker John Lumsden, though it wasn’t until 1891 that the club received the ‘Royal’ moniker. The first course was located in the Phoenix Park in the city before moving to its present location in 1889. Like many courses in Ireland, the Great War made its impact, and Royal Dublin was no exception. In 1914 it was acquired by the British Army to act as a school of musketry to be used as a shooting range, and by the time the members had the course returned to them four years later, little was left of the golf courses tees and greens. However, the upside of this saw a compensation cheque of £10,000 put to good use when the famous Harry Colt was invited to redesign the golf course, which he did in 1920 as one of his rare solo projects.

After the First World War, championship golf returned to Royal Dublin and saw the beginnings of the course hosting many influential tournaments including early Irish Opens in 1931 and again in 1936. The Irish Open was to return four more times in 1950, 1983, 1984 and 1985 and on the latter three occasions were won by Seve Ballesteros, Bernhard Langer, and Seve again. Ballesteros defeated Langer in a playoff, but only after four additional holes were required, and he eventually sunk a 40-foot putt to see him off. The club has also hosted multiple Irish PGA Championships, 29 Irish Amateur Opens, and 12 Irish Close Championships.

In 1959 one of the most famous names in the world of golf became the Head Professional at the Royal Dublin Golf Club – Christy O’Connor Snr. Inducted into the World Golf Hall of Fame in 2009, O’Connor won 24 European Tour titles, including at least one a year in the 1960’s, had 10 top-10 finishes in the 26 times he played in The Open, played Canada Cup (now the World Cup) 15 times and represented GB & Ireland in the Ryder Cup on ten consecutive occasions. Christy remained a regular sight around Royal Dublin right up to his passing in May of 2016.

The approach to Royal Dublin Golf Club, made across a wooden bridge onto the area known as Bull Island, is one of the most unique in golf. A mere twenty minutes from Dublin airport and only three miles from Dublin city center, the course is very accessible to anyone undertaking a golf vacation to the east coast of Ireland. Little other than rudimentary changes were made to the original Colt design until 2006 when Martin Hawtree did a re-work of the 6th, 7th and 8th holes in particular. Hawtree also lengthened the course to over 7,200 yards to address the modern developments in the game and made subtle improvements to some of the course bunkering.

The prevailing southwesterly wind usually helps the golfer on the way out and is a hindrance on the way home on this traditional out and back layout. However, there are some exceptions and the Par 3 fourth plays in the opposite direction from your first three holes and oft times into the wind. It is a great test that is surrounded by four pot bunkers, one of which is about twenty yards short of the green that plays with your mind about club selection. The green is covered in undulations, and a slope to the right side is ready to catch anything that is hit that way. Aim for the center of the green and hope that your club selection and wind speed calculations hold up to scrutiny! 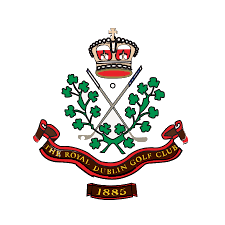 The legendary Christy O’Connor Snr, joined Royal Dublin in 1959 as Head Professional and remained in the post for 57 years. He was inducted into the World Golf Hall of Fame in 2009.