"Royal County Down is arguably the best golf course in the world and certainly one of the most challenging."

Old Tom Morris must have known he had a special piece of land to work with when in 1889 he was commissioned to design the links at Royal County Down, for he charged the princely sum of £4 rather than his usual one. This is arguably the best golf course in the world and certainly one of the most challenging. There is everything here for a lover of links golf to get their teeth into; hard fast surfaces, upturned saucer greens, the infamous ‘bearded’ bunkers, the blind tee shots, you name it and County Down provides it. The 9th hole, with its backdrop of the Slieve Donard Mountain, spire of the adjacent hotel and the sweeping Dundrum Bay to the side, has framed thousands of golfers photographs. The global reputation of this links is totally justified.

The front nine holes at Royal County Down at arguably the toughest. After a relatively straightforward opening Par five that requires a good drive and second, you face your first challenge of holding your ball on the putting surface. Whilst many of the putting surfaces at Royal County Down are not in themselves difficult, it is finding them in the first place that is. Gentle run-off’s and swales surround practically every green, and even a slightly wayward approach will get punished. The fourth hole is a fabulous par three, attacked from an elevated tee box to a green surrounded by bunkers and hollows with the Mountains of Mourne in the background. Walking off the green on four in regulation is quite an achievement. If you do so, take a deep breath on the tee at five, as things don’t ease up. What I believe to be one of the most challenging holes on the golf course, this dogleg par 4 requires a pinpoint accurate drive to be hit far enough to allow you any view to the green for your approach. The green is surrounded by bunkers, and depending on pin position, you could be left with a devilish, and lengthy putt.

Much is made of the blind tee shots at Royal County Down and its true to say that it can be quite disconcerting for the average amateur to be told by their caddy, or a white stone on top of a hill, which way the fairway lies. I can understand these sentiments completely and experienced the same feelings when I first played the links, but I have come to believe that there is something unique and special about their existence that Old Tom must have felt compelled to stick with. Modern courses are so sanitized so overtly subconscious of what the reaction will be that very few choose to push this particular design envelop anymore.

There are several occasions where you play “blind” on the front nine in particular; the tee shot and approach into the second, the tee shot on five and then six, but the most iconic is the drive off the ninth. Arguably one of the most photographed holes in the world, framed with the Mountains of Mourne and the spire of the Slieve Donard Hotel, the view from the peak of the hill looking down the fairway is really one to take in.

The back nine of Royal County Down is an equally tough test. After the relatively straightforward par three tenth, the blind 11th is a testing par four that requires a well placed drive that will struggle to fight against the right to left leaning fairway beyond. A pin on the left side of the green always presents a tough test for par. The twelfth offers a good birdie opportunity even for the mid-handicapper, so long as your drive and second are well struck and that will prepare you for one of the most beautiful holes on the course, and toughest, the thirteenth. Pinpoint accuracy off the tee will still likely leave a blind second to a rollercoaster green and surrounds where often you’ll find what you thought was on the money, may lie some 40-50 yards away! Par here, put the ball in your pocket and escape to the next as fast as you can. Fifteen is another tough par 4, made tougher if the wind is coming off the Irish Sea. A good drive will still leave a long iron second into a bunker-less green that falls away on both sides leaving an extremely difficult recovery.

If you have survived that, the finishing stretch may seam relatively straightforward, however looks can be very deceiving, just ask USA professional Rickie Fowler who came to the Dubai Duty Free Irish Open (Hosted by the Rory Foundation) in 2015 and finished his Saturday round with two ‘snowmen’, eight, eight, to fall out of contention. The lake on seventeen often gets criticism, but it is a natural feature and needs to be taken into account if a longer hitter. Once negotiated, you usually have an uphill approach to what is likely the toughest green on the golf courses, with exceptional undulations.

The eighteenth is a fabulous par five finishing that has no less than twenty-four bunkers on it, a narrow fairway and devilish rough. Like many of the holes at Royal County Down, short and front is always the best option and that is very much the case at the last where a ball left or right presents an almost impossible pitch and run to the pin. 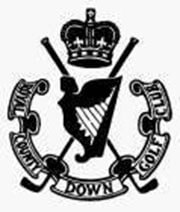 When Royal Co. Down hosted the 2007 Walker Cup Matches between GB & Ireland and the USA the teams contained some of what were to become the world’s best ever golfers including Rory McIlroy, Danny Willett, Rickie Fowler, and Dustin Johnston.