"Royal Birkdale is one of the most iconic golf courses in the world."

Located along what is regarded as the most exceptional stretch of golf links coast in the whole of England, Royal Birkdale Golf Club is arguably the most iconic of them all. Situated just 40mins north of the city of Liverpool, it is part of a cluster of world-famous names such as Royal Liverpool, Hillside, Southport & Ainsdale and a little further north, across the Ribble Estuary, Royal Lytham & St. Anne’s. Founded in July 1889 by nine eminent local gentlemen, it was one of the first clubs of its kind to inaugurate ladies into the club, in December that year and in fact, held its first ladies British Open Matchplay in 1909. The club of 1889 wasn’t constituted in its current location, that move came in or around 1894. While the designer of the revised layout is unclear, in 1922 Fred Hawtree and J. H. Taylor were hired to review the routing of the course. They decided to do this by working their way through the dunes, not over them which resulted in Royal Birkdale getting a reputation for being a very fair course and also for providing spectators with excellent vantage points for observing the golf.

Since the mid-1940’s Royal Birkdale Golf Club has hosted some of the most prestigious golf tournaments in the world, including the Open Championship on ten different occasions, including its 100th edition in 1971, The Curtis Cup, The Walker Cup and two Ryder Cup’s in 1965 and 1969. By the time the 1961 Open had been played at Royal Birkdale Golf Club, spectator numbers were, and it was recognized that the club needed to develop. The clubhouse and catering were upgraded, as was the course itself. Following the 1991 Open, the club took the brave decision to dig up and re-design all 18 of their greens to address problems that had been underlying for many years. The work and considerable investment saw the club named the No.1 course in the UK & Ireland in 1998.

The course has faced many challenges from the natural vegetation that surrounds and runs through the golf course. In some cases, the vegetation has threatened at times in the past to overrun the golf course. The staff at Royal Birkdale Golf Club have an extensive conservation management programme in place to control not only the vegetation but also the wildlife, as Birkdale is recognized as one of the most ecologically sensitive golf courses on the Open rota.

As for the golf course, it is everything you would expect from such a prestigious venue. At 7,156yards it is also one of the longest on the Open rota, with two par four holes just a single yard under 500yards in length. Royal Birkdale is topped and tailed by two of the best holes on the Open Championship rota. Right from the opening hole, you get an immediate sense of the challenge. The first is arguably one of the best opening holes in golf, never mind Open Championship venues. The tee shot needs to hit far enough right, towards the out of bounds and away from the left-hand bunker to get any angle at the green. The putting surface is well protected by three bunkers at the front but demands an accurate shot to have any chance at securing a par on what is a delicate green.

The finishing hole is also one of the Pro’s favourite holes in Open golf. At 473 it is not long by any means, but it is one of the most intimidating holes you will encounter. The tee shot is played slightly blind across some scrub with out of bounds running the entire length of the right side before a view of the famous art deco clubhouse opens up in front of you. The hole slightly dog-legs to the right, and five deep fairway bunkers absolutely must be avoided if you are to have any chance at par. A decent drive will leave you with a mid to long iron to a green protected by three deep revetted bunkers. A well-struck shot will leave you the opportunity to putt out in front of that magnificent clubhouse with memories of past Open Champions in the back of your mind. 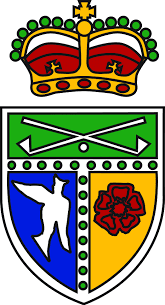 Founded in July 1889 by nine eminent local gentlemen, it was one of the first clubs of its kind to inaugurate ladies into the club, in December that year and in fact, held its first ladies British Open Matchplay in 1909.