"Prestwick Golf Club has a special place in golfing history."

Prestwick Golf Club has a special place in golfing history having staged the 1st ever British Open Championship in 1860 when Willie Park Jnr beat a certain Old Tom Morris by two strokes. Old Tom was the “Keeper of the Greens, ball, and clubmaker” and laid out the course in a 12-hole format over the links having moved from St. Andrews to Prestwick to take up the post. Prestwick would go on to hold twenty-four Open Championships with the last one held in 1925 and is only surpassed by St. Andrews as hosting more. Were it not for the small footprint of the golf course, it is likely that it may never have been removed from the rota but was deemed too small and crowded by 1925. In the post-Old Tom era, the only significant design changes to the golf course were made before the 1908 Open Championship by James Braid. He was responsible for reshaping the bunkers on the 4th and 10th holes for the tournament, one he went on to win!

There is undoubtedly an aura that surrounds Prestwick GC; you know that you are somewhere special in the history of the game. There is no question that Prestwick is quirky. It has more humps and bumps, swales and hollows, undulations and ripples on its front nine than on several courses combined. This is how the game originated, and that is how, in many people’s eyes, it should be played. There is a reason why some of its holes are called the Himalayas, Sea Headrig and Elysian Fields. A Headrig being a strip of land at the end of a plowed field which is left unploughed until after the main plowing is complete! Old Tom’s work at Prestwick preceded the significant changes he made on the Old Course in St. Andrews. So, in many ways, by playing Prestwick, you get to see the masters’ vision for the former, literally taking shape in front of you.

It is challenging to pick a favorite hole at Prestwick, so many stand out. The 1st, with the railway line running down the right as an out of bounds line is a great opening hole. The Pro likes the 3rd and 4th. The 3rd is a 533yard par five hole with out of bounds again running the length of the hole on the right in the form of the ‘Pow Burn.’ A lay-up to about 220 yards requires you to fly the ‘Cardinal Bunker’ with your second, or attempt the brave shot at the green across the corner. The 4th is a risk and reward par four, again with Pow Burn’s influence on your decision making. Three fairway bunkers need to be negotiated before you can attempt to think any further and, with the fairway sloping towards the burn, you need to be careful positioning that tee shot. Our final favorite is the 17th, the original 2nd hole from 1851 and the oldest existing hole in Open Championship golf. You don’t need to know anymore; you need to turn up and enjoy it.

There are not many clubhouses that we dissuade our clients from exploring, but if we were to encourage you to explore any one, it would be the clubhouse at Prestwick Golf Club. It is a genuine glimpse into golf’s past; aged wood panels, the story of Old Tom, the Open’s. A great way to end a perfect day of links golf on your vacation in Scotland. 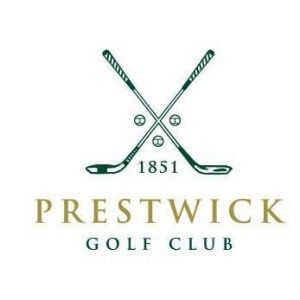 The locker room at Prestwick was extended in 1877, and in 1882 it housed 90 members lockers which are still in use today.