"No golf vacation to Ireland should miss the opportunity to play Portmarnock."

Portmarnock Golf Club is one of the best golf courses in Ireland. Founded in December 1893, a nine-hole course was laid out by friends William Chalmers Pickeman and George Ross, and among the new officers of the club was a well-renowned distiller, one John Jameson of Jameson Whiskey fame. A clubhouse was erected in 1896 but was destroyed by fire only to be rebuilt again in 1906, most of which remains to this day. Since 1927, Portmarnock has staged professional tournaments; the first being the Irish Professional Open with a prize fund of £1,000, and it has continued this proud tradition over the years. The club has hosted 19 Irish Opens, the 1959 & 1965 Dunlop Masters, The Canada Cup, The Amateur Championships, The Walker Cup, European Men’s Team Championships, St. Andrews & Jacque Léglise Trophies and several PGA and Home International events. Some of the greats of the game have competed and won at Portmarnock, including Arnold Palmer, Sam Snead, Ben Crenshaw, Seve Ballesteros, Bernhard Langer, and Phil Mickelson among others. Besides, practically every player of distinction that has ever been, from Rory McIlroy and Tiger Woods to Gary Player, Tom Watson, and Lee Trevino have all graced the links of Portmarnock.

The golf course is a combination of three individual nine holes with the ‘Red’ and the ‘Blue’ making up the Championship Course and the ‘Yellow’ mostly used in member play. Fred Hawtree added this third nine in 1971. While not as dramatic in appearance as some of the Irish links’, Portmarnock makes up for that in its constant demands on your attention. Shot making skills are required at every hole and particularly at and around the greens that are notoriously difficult to read. There are some fabulous stand-out holes at Portmarnock.

After a reasonably gentle introduction with a series of relatively short Par 4’s, the sixth is a brutal Par 5 depending on the wind direction, but at 602yards, it will take three great shots to have any chance of walking off with a par. Anything hit short to this uphill green will be found heading back in the direction from whence it came, so your focus is required. The back nine holds for us two of the best Par three holes in Ireland. The 181yard twelfth is played straight at the Irish Sea, and depending on wind direction, can be anything from a driver to a wedge. This green is again challenging to hold and rises from front to back, creating several plateaus and many putting difficulties. The fifteenth is possibly one of the best Par 3’s in all of golf. Running parallel to the Irish Sea, the golfer is usually faced with a right to left crosswind on this hole. Three severe pot bunkers are waiting for anything hit short and subtle swales, and depressions ring the putting surface, ready to collect anything not caught perfectly on target. With the left side of the green falling away about fifteen feet below the putting surface and the prevailing wind forever pushing you that direction, a ball resting at the bottom means par is almost impossible; a fabulous golf hole.

There is little rest bite in the finishing stretch, however, with three very big holes to bring you home, the pick of these being eighteen if only for the approach to the final green, the devilish pot bunkers surrounding it and the backdrop of the clubhouse. With a base in the city, Portmarnock Golf Club should be no more than a 40-minute journey from your hotel, making it very accessible. It also forms part of what is a great collection of golf courses in and around Dublin city. No golf vacation to Ireland should miss the opportunity to play Portmarnock, and we at the Consummate Pro will be delighted to bring you there. 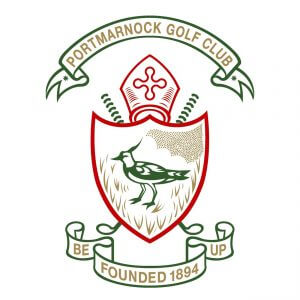 Portmarnock hosted the first ever professional tournament held in Ireland in 1927 where the total pot was £1,000.

BOOK WITH CONFIDENCE... WE ARE THE WORLD'S BEST GOLF TRAVEL COMPANY!