"Carne is brilliant. Front nine, back nine, every hole, every hill, every inch of the place is special."

Located approximately forty miles to the west of Ballina, in the town of Belmullet, Carne Golf Links, overlooking Blacksod Bay on the Wild Atlantic Way is in one of Ireland’s most perfect golf locations. The course was the final project completed by Eddie Hackett before his untimely death and is considered by many who have played Carne, to be his finest. A golf club has existed in Belmullet since 1925, but it didn’t move to its current location until 1985 when Hackett was hired. The first nine holes opened for play in 1992, the second in 1993 and 2013 a third nine, the Kilmore, opened for play, the work having been completed by Jim Engh design.

The regulation opening hole at Carne Golf Links is a beautiful dogleg Par four played slightly uphill to a green devoid of bunkers where the undulations provide all the necessary challenge and protections for par. There are only seven bunkers on the whole of the front nine holes which should give you all the indication you need of just how much the natural terrain comes into play at Carne Golf Links. Many of the fairways resemble a rollercoaster, with huge swales evident on all holes adding to that real links experience. The 200yard Par three, second hole, is a suitably testing follow-up. Played into the prevailing wind, the towering dunes at the back of the green offer little protection to the flight of the ball and thus a strong tee shot is vital.

The back nine of the Hackett design is no less challenging or dramatic, typified by the fabulous Par four, 11th hole. The tee shot needs to be threaded between the dunes like the eye of a needle and far enough to open up the second shot which is played slightly uphill, usually across the breeze; a stunning golf hole. The 12th is almost a mirror opposite of the previous hole, where again, considerable skill is required off the tee before the Par five, 13th hole, with out of bounds down the right brings you to one of the highest parts of the course and a beautiful vista across the bay. The finish is no less durable, typified by the Par five, 18th hole of 530yards in length that twists its way left then right to a plateau green.

It is hard to find a weak hole at Carne, and this is best summed up by the author Tom Coyne, who in his book ‘A Course Called Ireland’ wrote that “In any string of words I might pen over the rest of my life, I might never write a more true sentence than this: Carne is brilliant. Front nine, back nine, every hole, every hill, every inch of the place is special.”

If you are interested in playing Carne, then why not take a look at our Wild Atlantic Way Golf Tour for some ideas. 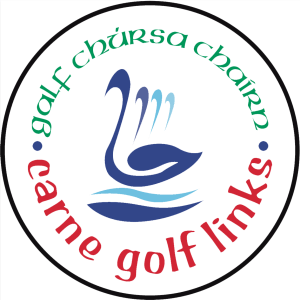 The course was the final project completed by Eddie Hackett before his untimely death and is considered by many who have played Carne, to be his finest.