"Old Head Golf Links is arguably one of the most spectacular settings for a golf course anywhere in the world."

If you were to hand out golf awards and rankings based on scenery, Old Head Golf Links would take first prize every day of the week. Situated approximately ten miles south of Kinsale on a rocky peninsula that juts out into the Atlantic Ocean, Old Head Golf Links is arguably one of the most spectacular settings for a golf course anywhere in the world. Some of the views from the cliff-top holes are mesmerizing. The course was created by a unique team comprising of Ron Kirby, Paddy Merrigan, Liam Higgins, and the late Eddie Hackett and comprises 140 of the 180-acre headland.

The first settlers, The Vikings, came to The Old Head in approx. 820AD closely followed by The Normans in approx. 1169. The ‘de Courcey’ family took control of the headland shortly after, building a castle at the narrowest point of entry in the 12th century, a structure that still forms the entrance to the golf course today. The eagle from the de Courcey family crest is that which can be seen on the club logo. There have been numerous shipwrecks along the coastline, but the most famous of these was the famous Lusitania passenger liner that sunk, in just 18-minutes, on the 7th of May 1915 with the loss of 1,198 lives after a German U-Boat hit her. This event, it is said, was the catalyst for the US entering World War 1.

Although termed a ‘links’ the course doesn’t adhere to the strict definition of the term, although many parts of the course runs as hard and fast as you would expect true links to do. However, what it may lose from a dictionary definition, it more than makes up for in test and challenge. There are six different tee complexes per hole, which should tell you all you need to know about what the Superintendent of Old Head requires in his armory to allow the course to be playable on certain days! This is simply one of life’s “must play” golf experiences.

Many of the holes at Old Head skirt the cliff tops, but none is more dramatic than the Par 5 12th. The tee boxes on twelve are perched almost clinging to the cliffs, with the Atlantic Ocean crashing against the rocks almost 150m below your feet. This can’t distract you, however, as the semi-blind drive needs pinpoint accuracy and all you have is a stone in the distance as your guide to finding a reasonably generous landing area. From there, however, the challenge increases as your approach shot is to an ever-decreasing strip of land, with the ocean once again threatening on the left, to a sliver of a green that itself clings onto the cliff top.

There is no debating that Old Head offers some of the most dramatic scenery of any Irish course and whether it should be classified a “links” or not, is really neither here nor there, this is a golfing experience that you should crave and we at The Consummate Pro will be delighted to bring you here on your golf vacation in Ireland. 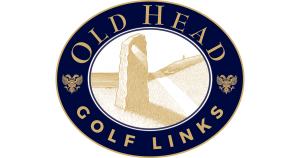 The ‘de Courcey’ family took control of the headland shortly after, building a castle at the narrowest point of entry in the 12th century, a structure that still forms the entrance to the golf course today. The eagle from the de Courcey family crest is that which can be seen on the club logo.