"The golf course itself is simply fabulous fun."

Tucked away on the Atlantic coast of Donegal, twenty-five miles northwest of Donegal town, Narin & Portnoo is another one of those Irish links courses that can rightly be labeled a ‘hidden gem.’ Despite having being founded in 1930, it is one of those courses that doesn’t immediately jump to mind as it lacks the reputation of some of its near neighbors in the county. Despite this, Nairn & Portnoo will undoubtedly live long in the memory after you have played it.

Narin & Portnoo had a relatively standard and checkered development, affected by the World Wars, the falloff in tourism as a consequence and as always in parts of rural Ireland, financial difficulties. Despite all of the challenges, the club and its committees get the ship afloat and even in more recent times the fate of the golf club at Nairn was in considerable doubt. Investors from the United States, though with strong Irish connections, have now secured its immediate future and the club will hopefully go from strength to strength. Acclaimed golf course architect Gil Hanse has been tasked with bringing Narin & Portnoo up to modern standards and redesigning some holes. It will be fascinating to see this all come to fruition.

The golf course itself is simply fabulous fun. After a somewhat reserved and straightforward opening four holes, many of whom you would almost consider mundane in a symbolic links, this golf course explodes into life and possesses some of the most visually stunning golf holes anywhere on the island of Ireland. The golf course uses its boundaries with the Atlantic Ocean to the fullest, and the water comes into play on twelve of the eighteen holes and the views along the coast are spectacular. There are some spectacular par three holes at Portnoo, none more so than the sixth, a 190yard shot across a severe dip to a green seemingly perched on a pedestal with little or no bailout to be seen – an awesome prospect!

The standout hole on the golf course for a variety of reasons is the 15th known as “Inis Caoil,” referring to a local island. This 525yard Par five has got to be one of the most picturesque golf holes that you will ever play anywhere. The beach of Nairn sits to your right and provides an out of bounds line for the hole. There are a line of dunes and a bunker to the left, making this a very tight driving hole. Three deep bunkers protect the landing area around which your second should ideally go, so again, great accuracy is required. The 3rd shot is played to a slightly elevated, but contoured putting surface. Walk off with a Par here and be very grateful. 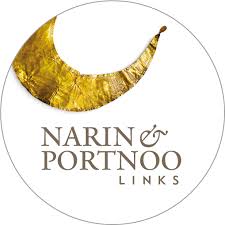 The standout hole on the golf course for a variety of reasons is the 15th known as “Inis Caoil,” referring to a local island.