Formby Golf Club is situated just 3 miles down the coast from Royal Birkdale, Hillside and Southport & Ainsdale. Though founded in 1884, its old layout is not recorded in the annals of the club until it is noted that the erstwhile Willie Park established the links properly in 1912. The original clubhouse had been burnt down and rebuilt before it was out to use during the First World War as a convalescence home for returning soldiers. After the war, in 1922, James Braid made a series of alterations to the course but in particular, to holes 15-18, adding some length to these holes but the primary reasons were to relocate the 17th due to the proximity of planned housing. However, the most significant change to the layout came as the direct consequence of changes to the Liverpool Docks made to facilitate increased freight traffic. It became apparent that coastal erosion was going to have a severe impact on the golf course, particularly at the 8th and 9th and in the end, it was decided it would be better in the longer term to move the holes entirely away from that end of the course as opposed to making remedial changes. As a result, Donald Steele created new 7th, 8th and 9th holes in addition to a new tee box at the 10th. The new layout was completed in the early ’80s and was played during the 1984 Amateur Championships.

Rarely has a year gone by at Formby Golf Club where an event or tournament of significance has not been held. Included in this list has been multiple men’s and ladies amateur Championships including the 1984 victory by Jose-Maria Olazabal over Colin Montgomery and the 2009 success by young Italian, Matteo Manassero. Formby Golf Club also hosted the 33rd Curtis Cup which was won by the United States in 2004.

The golf course is classic links; deep rough, undulating fairways and greens, with wispy grasses and imposing dunes. Unusually, however, Formby is also heavily tree-lined in places, predominantly with tall pines, which gives it an air of Pinehurst in areas. Some of this has been in existence since the early days, and others have been added to create boundary lines and obscure development. Either way, it doesn’t take anything from the links feel of Formby.

One of these tree-lined holes that is a great test is the 419yard par 4, 7th hole. An accurate drive through the tree-lined opening to the fairway is a must to have any chance at making par. Once you have found the fairway, a seven or eight iron is all that will be required to reach the green, but holding it is a different matter entirely as it is elevated and slopes severely from back to front, meaning any under hit will be rolling back down the fairway towards you — a great par four hole.

The Pro’s favorite hole at Formby is the 9th. This 450yard par 4 is a tough test. From an elevated tee box, which affords superb views across Liverpool Bay, the hole is played into the prevailing wind making it considerably longer than its yardage. The two fairway bunkers must be avoided to have any chance at reaching the green, and your drive must stay clear of the heavy rough just off the fairway. If successful, your second is played over the dunes and rough to a green framed by Scotch Pines. The putting surface is one of the more difficult on the golf course, with severe run-off’s awaiting anything offline. A par is without a doubt a satisfactory score at the 9th.

Formby is a great golfing challenge and one not to be missed when in this part of the northeast of England. With one of the most iconic golf courses in the world in Royal Birkdale nearby, you can combine Formby, Hillside and Southport & Ainsdale or others to have a fabulous experience in this part of the country. At the Consummate Pro, we highly recommend that you make a visit and we will be delighted to bring you to this stunning part of the English coastline to enjoy a world-class golf experience. Take a look at our “Best of Southport & Liverpool Experience” to see how Formby Golf Club fits into an itinerary in this part of England. 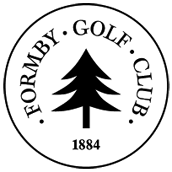 The original clubhouse had been burnt down and rebuilt before it was out to use during the First World War as a convalescence home for returning soldiers.