"The run of holes from the 4th through to the 8th is simply spectacular."

There is evidence that golf was played at on a nine-hole layout in Cruden Bay as early as 1791, but it wasn’t until 1894 when Old Tom Morris and Archie Simpson were commissioned to design the links that the course began to develop. By 1899, a full eighteen holes were open for play. Cruden Bay Golf Club is located 23miles north of the city of Aberdeen on the northeast coast of Scotland, an approximate hour-long drive from the ‘Home of Golf’ in St. Andrews. The club was officially formed in 1900, and in 1926, Tom Simpson and Herbert Fowler were called upon to oversee a redesign of the original Old Tom layout, though many of his original greens remain today.

The run of holes from the 4th through to the 8th at Cruden Bay Golf Club is simply spectacular. Comprising some very long holes such as the 196yard par three 4th, 509yard par four 5th, the 531yard par five 6th, and the 458yard par four 7th, you will be forgiven for thinking that all your woes have arrived in one 4-hole stretch, but their length does not detract from their beauty.

The 4th is a fabulous par three played through a natural valley in the dunes to a slightly elevated green that has a severe run-off at the front. Framed perfectly by the dunes to the rear and the village to the left, this is not a hole to lose concentration on for a second. The 5th is a challenging long par four at 509yards off the tips. A blind tee shot must be trusted to find the valley beyond, and when found, presents you with a long second to a very narrow green approach.

The Pro’s favorite hole is the par five, 6th. A well struck shot from the elevated tee between the dunes to the lunar like fairway beyond only presents you with your next challenge. The fairway narrows significantly from about 170yards to the pin and also dog-legs severely left. The wise play is to manage this hole carefully as a three-shot approach, but two pot-bunkers protect the right side of the fairway and a burn also runs across the front of the green ready to swallow up anyone who feels adventurous and wants to go for the green with their second. The (sensible!) third shot is played to an upturned saucer of a green, protected by a further pot bunker to the front, dunes beyond and a deep valley to the right. Par here is a great score. Take it and run to the next!

Cruden Bay Golf Club is a firm favourite of The Consummate Pro. If you would like to see how it fits into a golf vacation, take a look at the “Aberdeen Collection Tour” for some ideas. 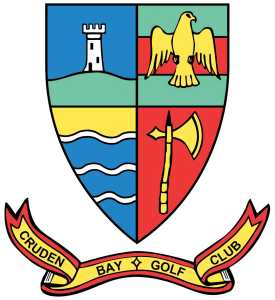 There is evidence that golf was played at on a nine-hole layout in Cruden Bay as early as 1791, but it wasn’t until 1894 when Old Tom Morris and Archie Simpson were commissioned to design the links that the course began to develop.