"Baltray is also unique in the fact that it is one of less than 20 golf clubs in the world where you can overnight in the clubhouse."

Situated at the mouth of the River Boyne, just four miles outside of Drogheda, a town approx. Twenty-five miles north of Dublin, County Louth Golf Club is a  classic links, and has significant pedigree having been host to The Irish Open in 2004 and 2009, and has been the home of the East of Ireland Amateur Championships every year since 1941. It was founded in 1892 and grew slowly and organically, and in 1938 designer Tom Simpson formally started to shape Baltray into Championship standard, and much of his work remains today. Simpson noted that the natural dunes and topography were enough of a defense for the course and as a result, he included only fifty bunkers in the original plan.

County Louth Golf Club (Baltray) is a Par 72 running to 7,031yards and is laid out in two traditional loops, with some challenging stretches because practically every hole, except for twelve and thirteen, plays in a different direction from the next. Baltray is probably best defined and known for its Par three’s, the 5th (‘Haven’) being a superb example. A 173-yard test that encompasses a large false front designed to catch any less than well-struck irons and two devilish pot bunkers strategically positioned on the right of the green lying in wait for any ball that should fall off the sloped surface. Shortly after, the seventh (‘Shepards Bank’) is almost a mirror image, the pot bunkers again catching your eye, and quite often a ball, from the tee. The pick of them, however, won’t be experienced until the end of your round at seventeen (‘Jib’). A 209yard slightly uphill hole that usually plays into the prevailing breeze has caused severe damage to many a scorecard. If you managed to escape with a Par, you then face the 559yard eighteenth holes to see you home.

Donald Steel’s company was invited to work on improving the course in 2003, and Tom Mackenzie, widely recognized as a devotee of Simpson was given the task primarily of bringing the course up to modern day standards to cope with club technology, hence why it is now over the 7,000 yards mark. In 2014, two holes (No. 2 and No. 5) were renovated without altering the original design character, and a new alternate par three hole was created adjacent to the present seventeenth. Course Architect, Philip Spogard of Spogard & VanderVaart, was tasked with this upgrade, which has proven very popular.

Baltray is also unique in the fact that it is one of less than 20 golf clubs in the world where you can overnight in the clubhouse, a building which started life as a golf hotel in 1928, was purchased by the club in 1943 and subsequently converted to a clubhouse. There are 12 comfortable Dormy House bedrooms, a mix of single and double/twin, that can be reserved for groups and individuals that add significantly to the overall experience of playing golf at Co. Louth, Baltray. If you are interested in playing at County Louth Golf Club and would like to see how it might fit into an itinerary, then why not take a look at our Dublin and East Coast Tour for some ideas. 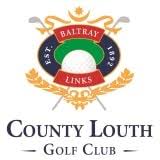 Irish professional, and 2019 Open Champion Shane Lowry, became the first amateur to win a professional European Tour title when he lifted the Irish Open at Baltray in 2009